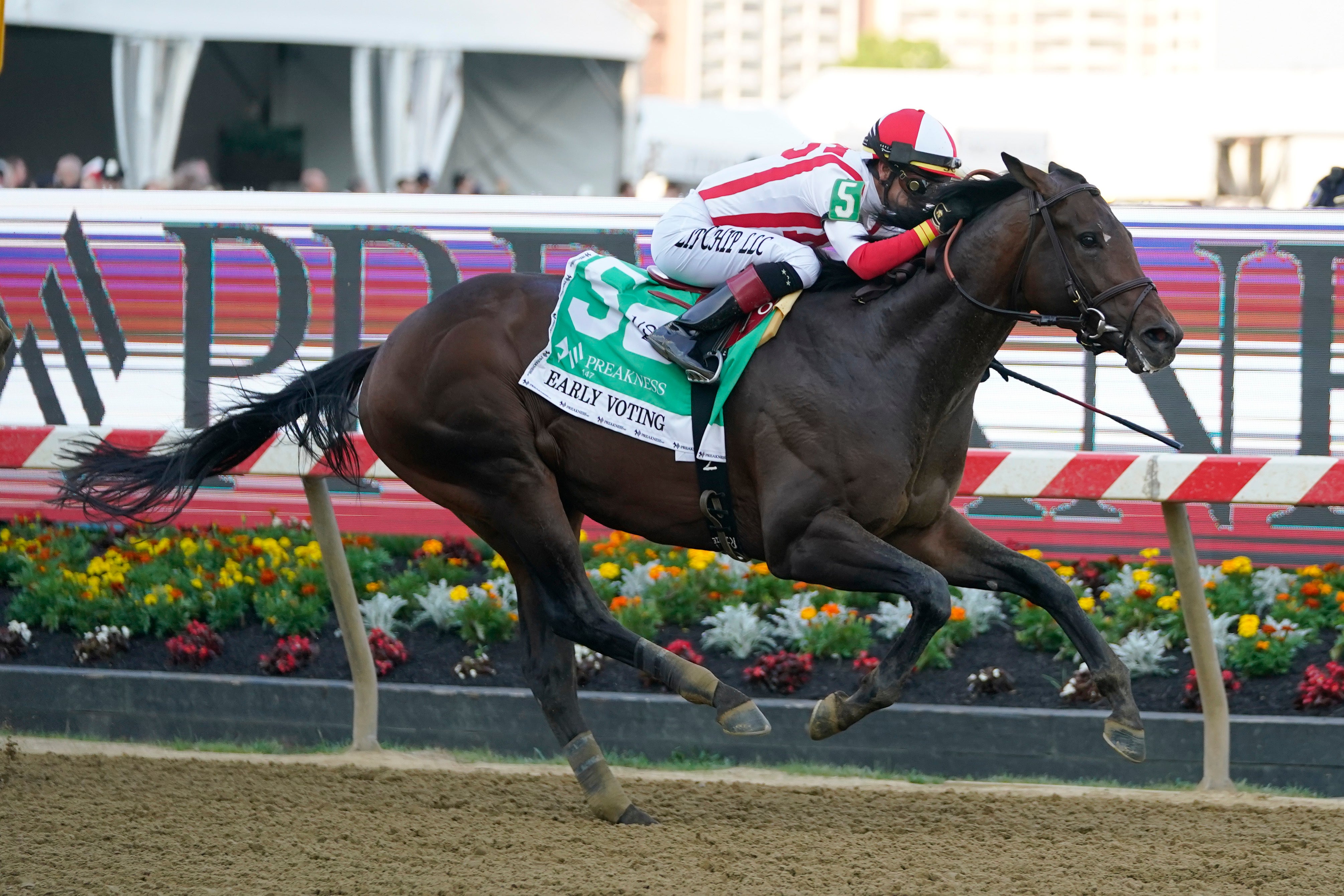 Twelve hours before Early Voting won the Preakness, Kentucky Derby champion Rich Strike was back on the track at Churchill Downs to begin preparations for the Belmont Stakes.
After impressing with a strong workout, Rich Strike remains on track for the third leg of the Triple Crown. Trainer Eric Reed confirmed to The Associated Press on Sunday the plan is “absolutely” still to run Rich Strike in the Belmont.
But there won't be a showdown between the surprise Derby champion and the Preakness winner. Early Voting’s owner and trainer confirmed the colt will bypass the Belmont; they plan to run him this summer with the ultimate goal of getting him ready for the $1.25 million Travers Stakes at Saratoga Race Course in upstate New York on Aug. 27.
Owner Seth Klarman and trainer Chad Brown cast doubt on the Belmont minutes after Early Voting held off favorite Epicenter to win the 1 3/16-mile Preakness, citing the mile-and-a-half distance as an obstacle.
“There will be some racing before (the Travers),” Brown said. "We’ll get him back to Belmont, assess him, train him a bit and then start to map out a campaign that hopefully leads us to the Midsummer Derby.”
Epicenter, the first horse in a decade to finish second in both the Kentucky Derby and Preakness, likely won't be brought back for the Belmont, which would be a third race in five weeks. Owner Ron Winchell said "that's a stretch” based on Epicenter's recent schedule.
Owner Rick Dawson prioritized extra rest for Rich Strike after the 80-1 long shot won the Derby rather than pushing for a return two weeks later in the Preakness, which was won by a well-rested horse off a six-week layoff. Reed on Saturday called skipping the Preakness “one of the toughest decisions” he has made and added he thought Rich Strike wouldn't have been mentally ready for the race.
The plan is now for Rich Strike to stay at Churchill Downs in Louisville, Kentucky, through the end of the month before traveling to New York.
“He does so well here I just didn’t want to change anything yet,” Reed said. “He’ll get eight or nine days at Belmont to gallop and get used to the surface.”
Little-known jockey Sonny Leon is expected to ride Rich Strike in the Belmont after engineering the perfect trip to win the Derby.
It took a horse being withdrawn from the Derby to get Rich Strike into the field just before the deadline. That horse, Ethereal Road, came from behind to win the $100,000 Sir Barton Stakes on the Preakness undercard Saturday.
"We can definitely build off this," said 86-year-old Hall of Fame trainer D. Wayne Lukas, who started second-guessing himself for not letting Ethereal Road run in the Derby.
But there's still a chance of Ethereal Road running in a Triple Crown race. After winning the Sir Barton at 1 1/16 miles, jockey Luis Saez didn't seem worried about the longer Belmont.
“Oh yeah, he can run all day," Saez said. “He can definitely go longer.”
Lukas-trained filly Secret Oath, who finished fourth in the Preakness, won't run in the Belmont. Lukas said last week the ideal roadmap for the Kentucky Oaks winner includes Saratoga races in July and August and one at Parx outside Philadelphia in September before the Breeders' Cup in early November.
A couple of other Preakness horses are Belmont candidates, most notably third-place finisher Creative Minister. Trainer Kenny McPeek said the Belmont is the plan because Creative Minister's pedigree indicates the longer distance will help.
“I just think he’ll like the added ground, as long as he handles the surface up there," McPeek said.
Skippylongstocking, who was fifth, could also go to the Belmont. But trainer Saffie Joseph isn't in a hurry to make a decision until next week.
“It might be worth taking a shot at it,” Joseph said. “We’ll see how he comes out and see how his energy is and then decide.”
By STEPHEN WHYNO (AP Photo/Julio Cortez)
Related Stories
13h ago

Yankees' Judge walks off Astros for 2nd time in 4 days

Yankees' Judge walks off Astros for 2nd time in 4 days