By: News 12 Staff
Storm Watch Team Meteorologist Allan Nosoff says New York City will see mostly sunny skies this weekend, but there's the possibility for rain on Sunday.
Saturday will see calm winds and plenty of sun with highs in the mid-60s. 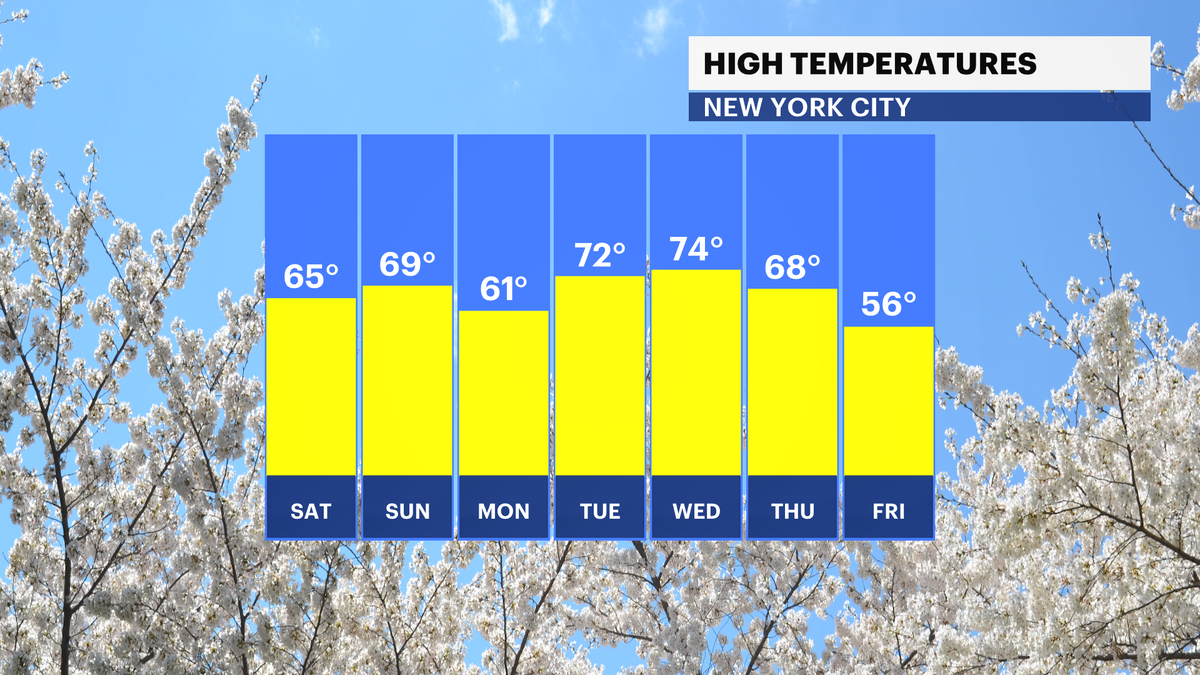 Sunday will be mostly sunny after an isolated shower at dawn with a few thin clouds developing late in the day and highs in the low-70s but much cooler along the coast. 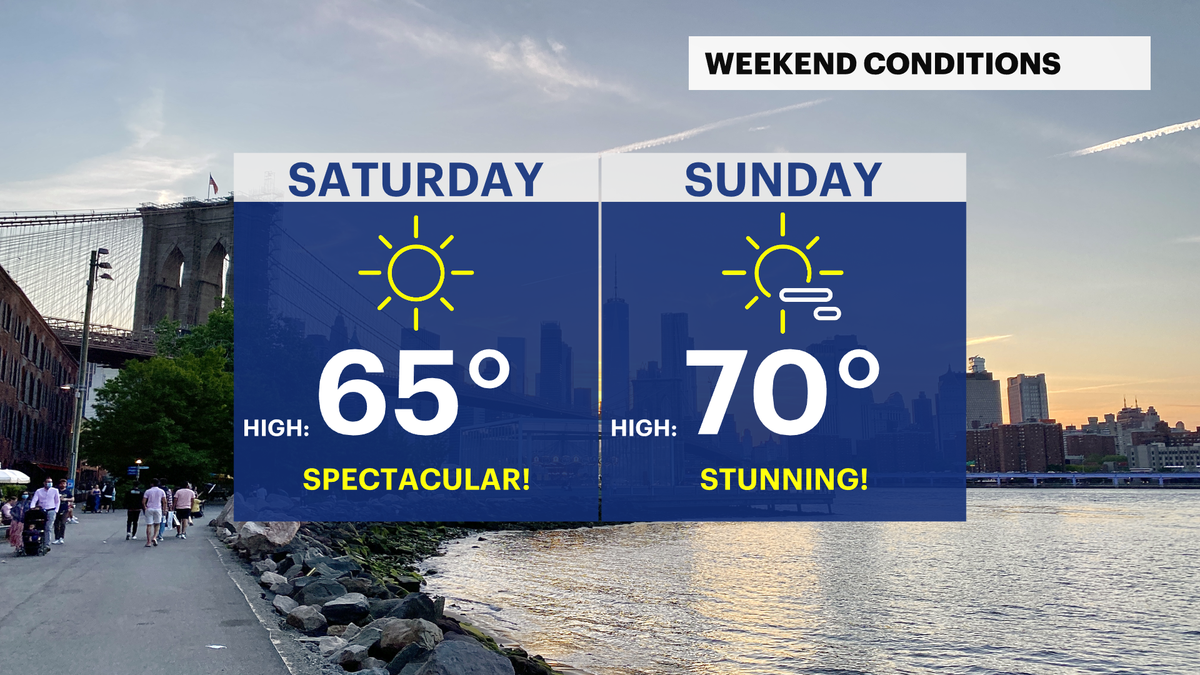 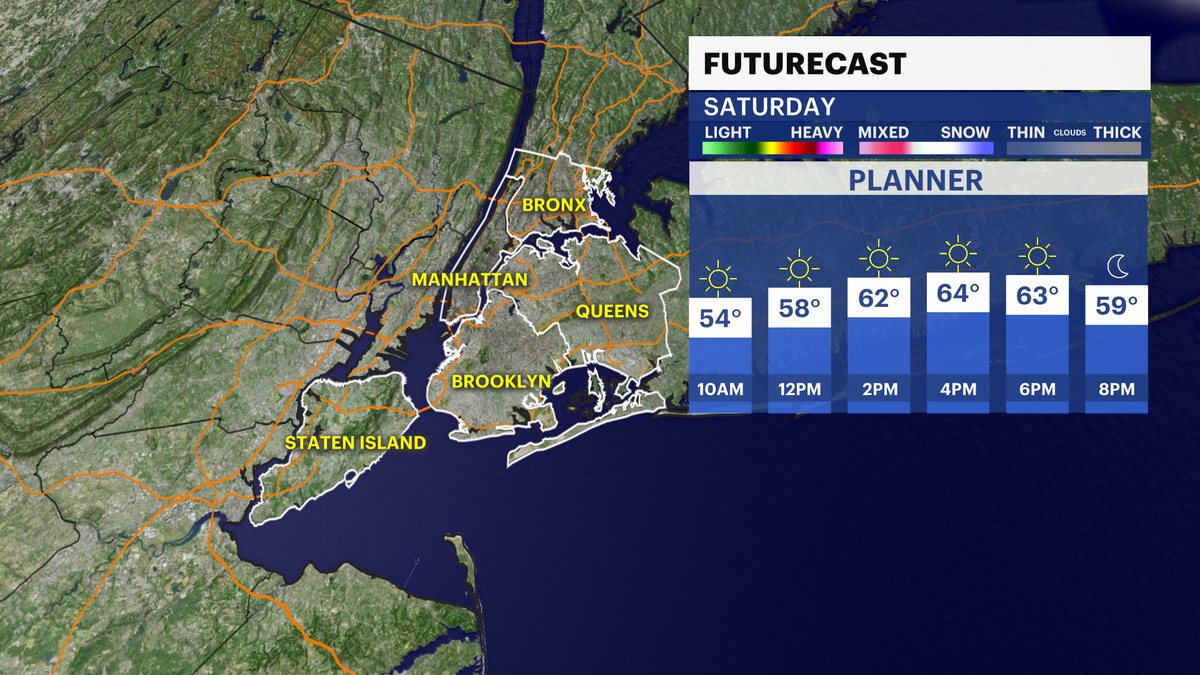 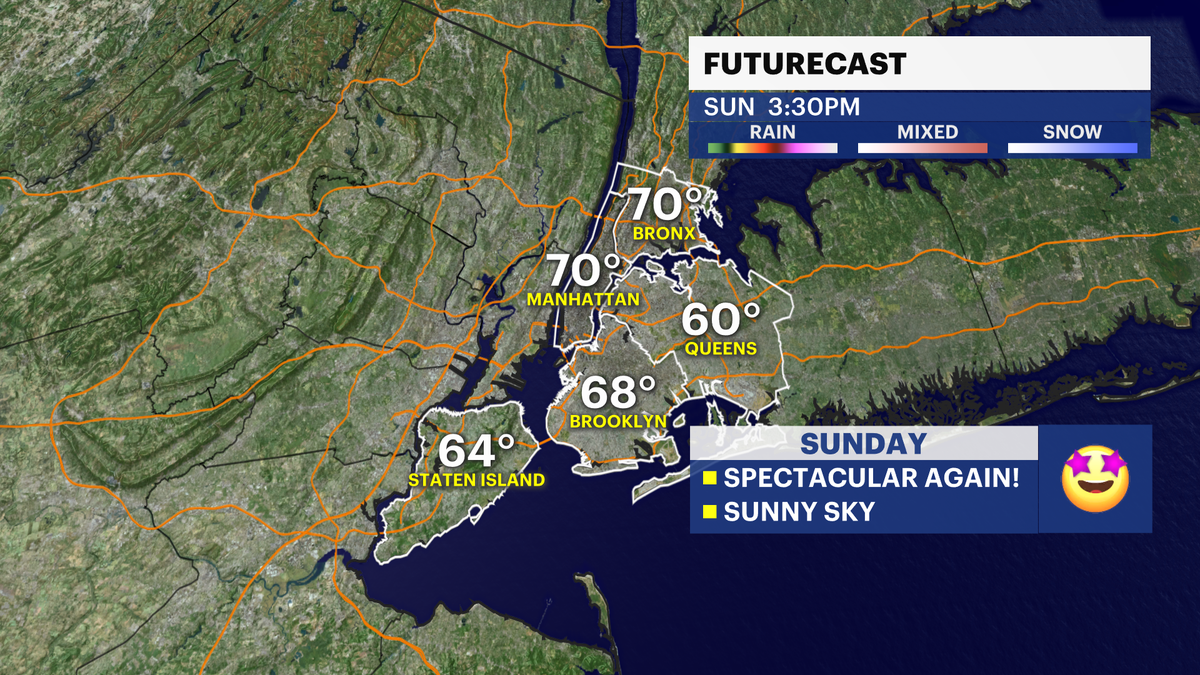 Monday's forecast calls for mostly cloudy skies with a few scattered showers. Temperatures will be in the low-60s. 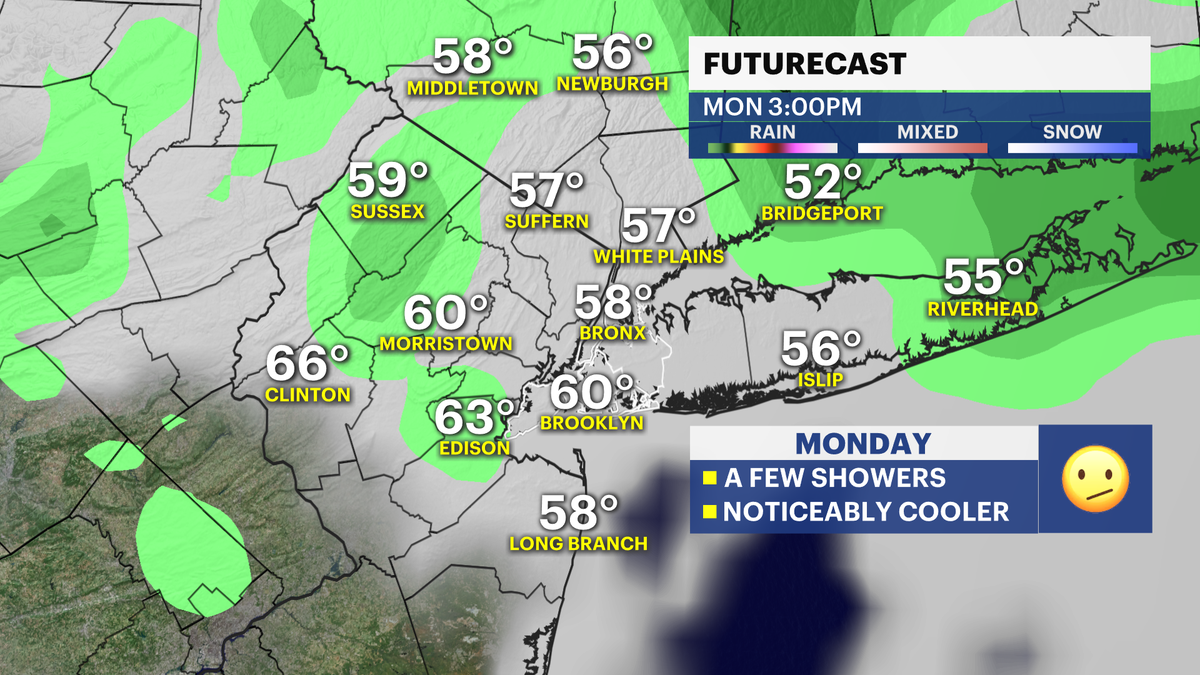 It will be a partly cloudy Tuesday, but temperatures will be warm around the low-70s. 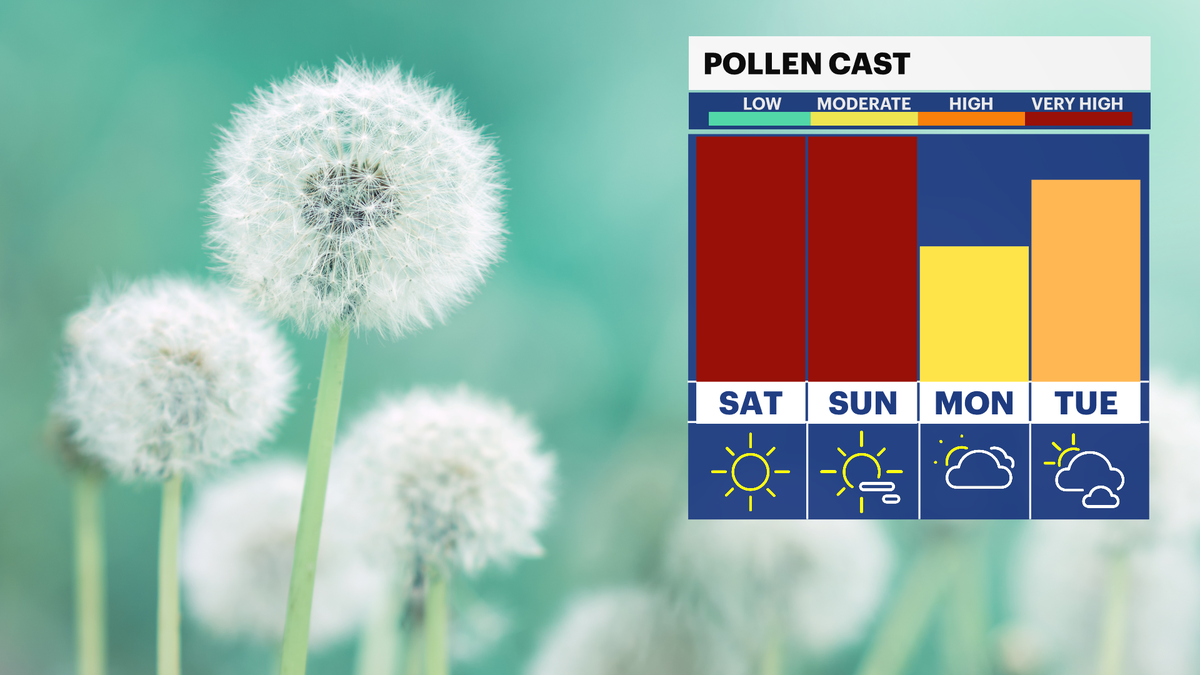 NEXT: A fabulous​ weekend is in store with 60s and sunshine!
NEXT: Rain returns Sunday night, with an unsettled start to next work week. Briefly cooler Monday.
FORECAST
SATURDAY: Plenty of sun, calm and mild! Highs around 65. Lows down to 47.
SUNDAY: Mostly sunny, a few high thin clouds late. Pick of the weekend, it'll be awesome! Highs up to 70 (60s along coast). Lows down to 53. An isolated shower by dawn.
MONDAY: Unsettled & cooler start to the workweek. Mostly cloudy with a few scattered showers. Highs only around 60. Lows hovering near 56.
TUESDAY: Partly cloudy and warm! Highs near 71. Lows down to 57.
WEDNESDAY: A few morning showers, then partly cloudy. Highs up to 74. Lows near 55.
THURSDAY: Partly cloudy and remaining mild. Highs around 69. Lows down to 50. 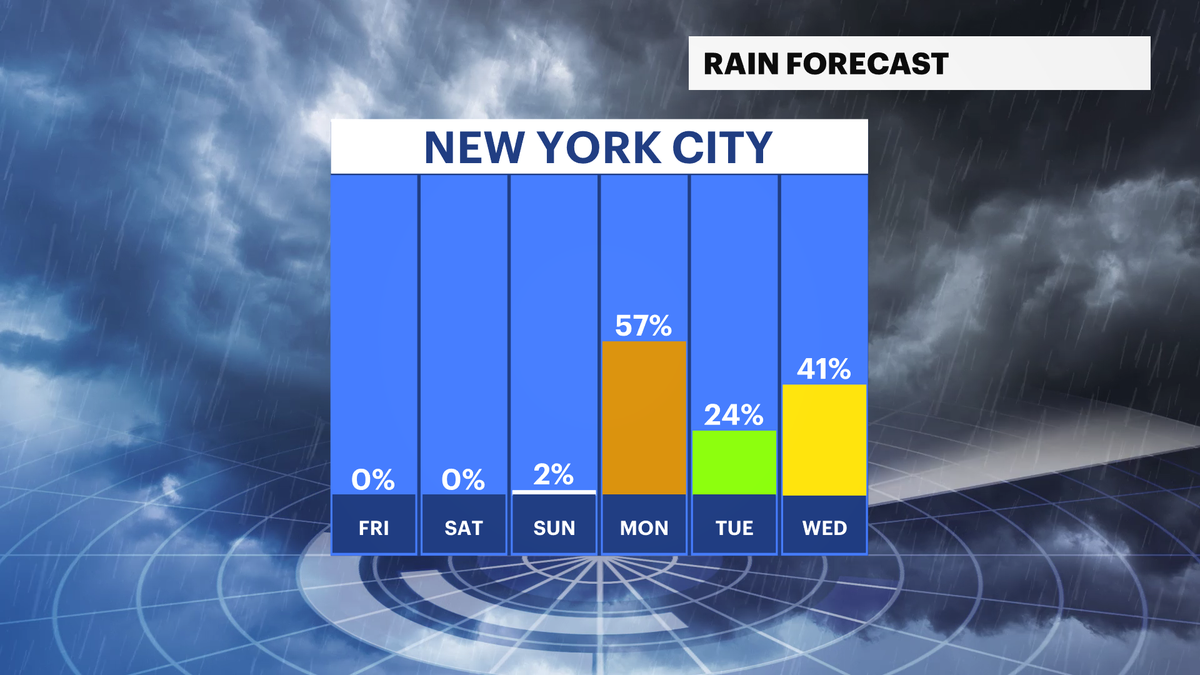 HEAT ALERT: Heat advisory in effect for NYC with temperatures expected to rise into the 90s

Hot weekend brings temps into the 80s this weekend

Summer-like temperatures move in for a hot and humid weekend

Some sun, less wind ahead of rainy weekend