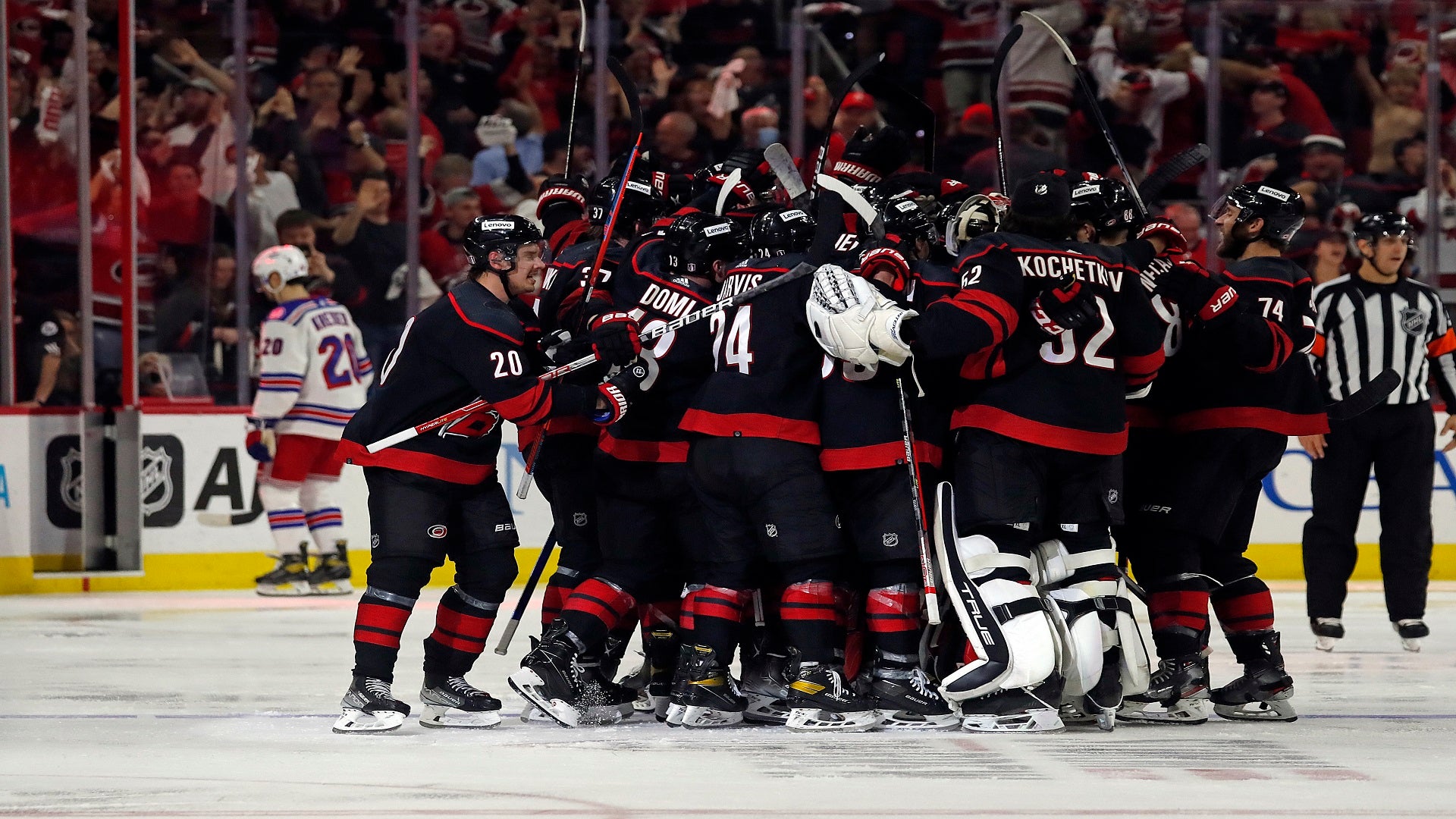 Ian Cole beat Igor Shesterkin at 3:12 of overtime to help the Carolina Hurricanes beat the New York Rangers 2-1 Wednesday night and take Game 1 of their second-round playoff series.
The defenseman's second career playoff goal capped a late comeback by the Hurricanes after they trailed most of the night. Sebastian Aho finally pushed one past Shesterkin in the final minutes of the third period to send the game into OT.
Then came Cole's rebound shot, which clipped the stick of Rangers defenseman Ryan Lindgren to change direction on the way toward the net before slipping past Shesterkin to end this one.
Carolina also got a key effort from Antti Raanta, who had 27 saves and helped the Hurricanes hang around as the Rangers controlled play through the first two periods.
The Hurricanes won home-ice by claiming the Metropolitan Division title, secured with a win against the Rangers in Madison Square Garden in the final week of the regular season. They nearly handed it over to the Rangers on the series' opening night, but now will look for a sixth straight home win this postseason when they host Game 2 on Friday night.
Filip Chytil scored a first-period goal for the Rangers, while Shesterkin finished with 24 saves.
Both teams advanced through grueling seven-game first-round series, first with Carolina finally getting past Boston on Saturday followed by New York rallying past Pittsburgh in overtime a day later.
The Hurricanes never trailed in their series nor in their four home wins. The Rangers had to rally from a 3-1 series deficit with three straight wins, which included Shesterkin - finalist for the Vezina Trophy for league’s top goalie and Hart Trophy for league MVP - bouncing back from surrendering 10 goals in Games 3 and 4.
Yet when this one started, it was the Hurricanes who looked a step slow while the Rangers moved the puck effectively and gave up few quality chances.
And the Rangers were also opportunistic at the perfect moment to seize early momentum.
As defenseman Tony DeAngelo tried to send the puck back to teammate Jaccob Slavin for a reset, Rangers forward Alexis Lafrenière stole the pass to lead a 3-on-2 rush. Lafrenière passed to Chytil, who one-timed the puck from the right side past the extended stick of Slavin and Raanta at 7:07 of the first.
That score held up for the Rangers nearly the rest of the night until the Hurricanes finally showed an urgent third-period edge to build some momentum. They even twice got pucks past Shesterkin only to ping the crossbar, first on a breakaway by Nino Niederreiter and later from Aho.
But Aho responded less than 30 seconds later to finally find the net, taking a feed from rookie Seth Jarvis and then going to his backhand side. Shesterkin made the initial stop, but Aho knocked the rebound across for the tying score with 2:23 left in the third.
Related Stories

See all
2d ago