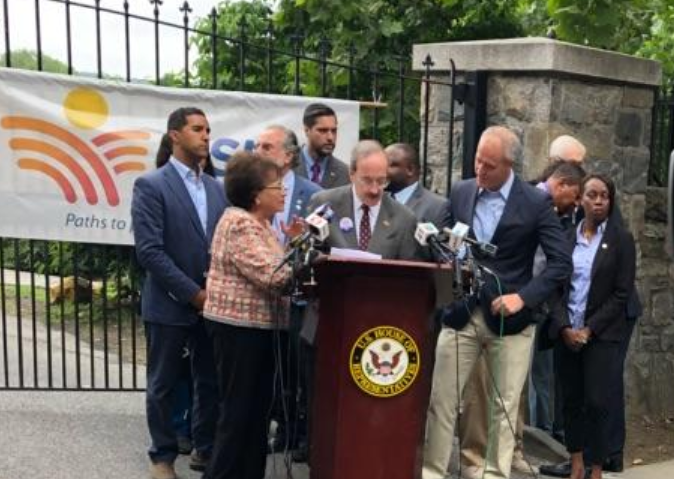 Some of Westchester's most powerful politicians gathered Saturday outside a facility in Yonkers where immigrant children are being housed.
Reps. Nita Lowey, Eliot Engel and Sean Patrick Maloney were outside Rising Ground where at least 20 immigrant children are reportedly being detained. Lawmakers say they were hoping to see the children, but were denied inside by federal authorities.
“This is not some prison in some foreign country. This is a taxpayer-funded facility in the U.S. and members of Congress should be able to go in there and tell the rest of you what's going on,” said Rep. Maloney.
Westchester County Executive George Latimer was also on hand outside the facility. He called President Trump’s zero-tolerance policy on the border a potential health threat.
“If somehow a child here is not immunized and starts to transmit a communicable disease to other children, we have a legal responsibility to deal with it,” said Latimer.
The news conference in Yonkers came two days after Gov. Andrew Cuomo toured a foster facility apparently in Westchester. The state, Congress and the county have been in the dark about how many children are being held, and where and when they will be released.
“Although the president said he's reversing his policy, there are still many children caught in the pipeline and we want to make sure they get reunited with their parents,” said Rep. Engel.
Rep. Engel says he's also introduced a bill that would require state departments in Central America to prioritize reuniting immigrant children with their families immediately.
Related Stories

LI's Balin back in PGA Championship