By: News 12 Staff
A Westbury man appeared in court Sunday after allegedly shooting a 19-year-old woman in the chest in New Cassel. The woman survived after doctors removed a bullet near her heart.
Police say 21-year-old Brian Mercado-Ventura was involved in a domestic disturbance with the victim at a home in New Cassel just after midnight on Saturday.
An order of protection was issued. Mercado-Ventura faces multiple charges, including assault, criminal possession of a firearm and tampering with physical evidence.
Nassau County District Attorney Anne Donnelly said during a news conference Saturday that the number of domestic violence cases continues to rise in the county.
Police say 30-year-old Quay-Sean Renard Hines, of Bay Shore, fatally shot 33-year-old Amelia Laguerre of Queens on March 31 in the parking garage of her job at Northwell Health in North New Hyde Park.
Connelly says Laguerre was killed “because the defendant wouldn’t allow her to go on with her life after their relationship.”
MORE: Officials: Suspect in fatal shooting stalked Northwell Health employee for months after break-up
In East Meadow on March 23, police say a man stabbed his wife while she was holding their 18-month-old daughter in her arms. In an apparent suicide attempt, he plunged the knife into his own neck. Both parents are in serious, but stable condition. The child has been released to family members.
On March 12, a man stabbed a woman in Massapequa.
“We need to let victims know they can speak up,” says Donnelly. “There are many domestic violence resources.”
One of those resources is the Safe Center Long Island that helps victims of domestic violence, rape and sexual assault. They have a 24/7 hotline service at 516-542-0404.
Adelphi University Social Work Professor Anthony Zenkus says the sooner a victim gets help, the better.
"The behavior for the abuser is often very controlling," explains Zenkus. "Telling who the victim can and can't speak to, monitoring their phone call and messages, checking their online usage." 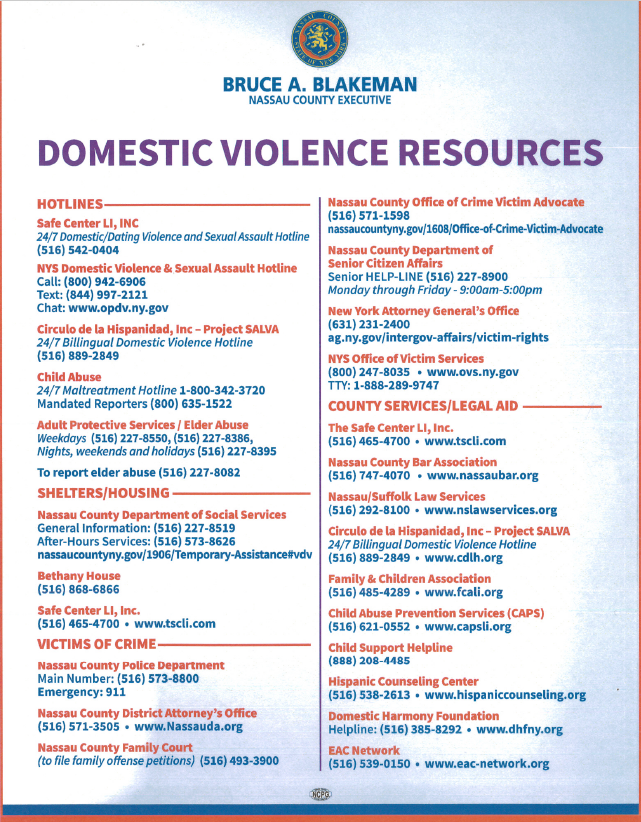