By: Associated Press
BUFFALO, N.Y. (AP) - A white 18-year-old wearing military gear and livestreaming with a helmet camera opened fire with a rifle at a supermarket in Buffalo, killing 10 people and wounding three others Saturday in what authorities described as “racially motivated violent extremism.”
Police said he shot 11 Black and two white victims before surrendering to authorities in a rampage he broadcast live on the streaming platform Twitch.
Later, he appeared before a judge in a paper medical gown and was arraigned on a murder charge.
“It is my sincere hope that this individual, this white supremacist who just perpetrated a hate crime on an innocent community, will spend the rest of his days behind bars. And heaven help him in the next world as well,” said Gov. Kathy Hochul, speaking near the scene of the attack.
The massacre sent shockwaves through an unsettled nation gripped with racial tensions, gun violence and a spate of hate crimes. In the day prior to the shooting, Dallas police said they were investigating a series of shootings in Koreatown as hate crimes. The Buffalo attack came just one month after another mass shooting on a Brooklyn subway train wounded 10 people.
The suspected gunman in Saturday's attack on Tops Friendly Market was identified as Payton Gendron, of Conklin, New York, about 200 miles (320 kilometers) southeast of Buffalo.
It wasn't immediately clear why Payton had traveled to Buffalo and that particular grocery store. A clip apparently from his Twitch feed, posted on social media, showed Gendron arriving at the supermarket in his car.
The gunman shot four people outside the store, three fatally, said Buffalo Police Commissioner Joseph Gramaglia. Inside the store, security guard Aaron Salter, a retired Buffalo police officer, fired multiple shots. A bullet hit the gunman’s bulletproof armor but had no effect, Gramaglia said.
The gunman then killed the guard, the commissioner said, then stalked through the store shooting other victims.
Police entered the store and confronted the gunman in the vestibule. He put his rifle to his own neck, but two officers talked him into dropping the gun, Gramaglia said.
“This is the worst nightmare that any community can face, and we are hurting and we are seething right now,” Buffalo Mayor Byron Brown said at the news conference. “The depth of pain that families are feeling and that all of us are feeling right now cannot even be explained.”
Twitch said in a statement that it ended Gendron's transmission “less than two minutes after the violence started.”
A law enforcement official told The Associated Press that investigators were looking into whether he had posted a manifesto online. The official was not permitted to speak publicly on the matter and did so on the condition of anonymity.
Buffalo police declined to comment on the document, circulated widely online, that purports to outline the attacker's racist, anti-immigrant and antisemitic beliefs, including a desire to drive all people not of European descent from the U.S. It said he drew inspiration the man who killed 51 people at two mosques in Christchurch, New Zealand, in 2019.
At the earlier news briefing, Erie County Sheriff John Garcia pointedly called the shooting a hate crime.
“This was pure evil. It was (a) straight up racially motivated hate crime from somebody outside of our community, outside of the City of Good Neighbors ... coming into our community and trying to inflict that evil upon us,” Garcia said.
Among the dead was Ruth Whitfield, the 86-year-old mother of a retired Buffalo fire commissioner.
“My mother was a mother to the motherless. She was a blessing to all of us,” former Fire Commissioner Garnell Whitfield told the Buffalo News. 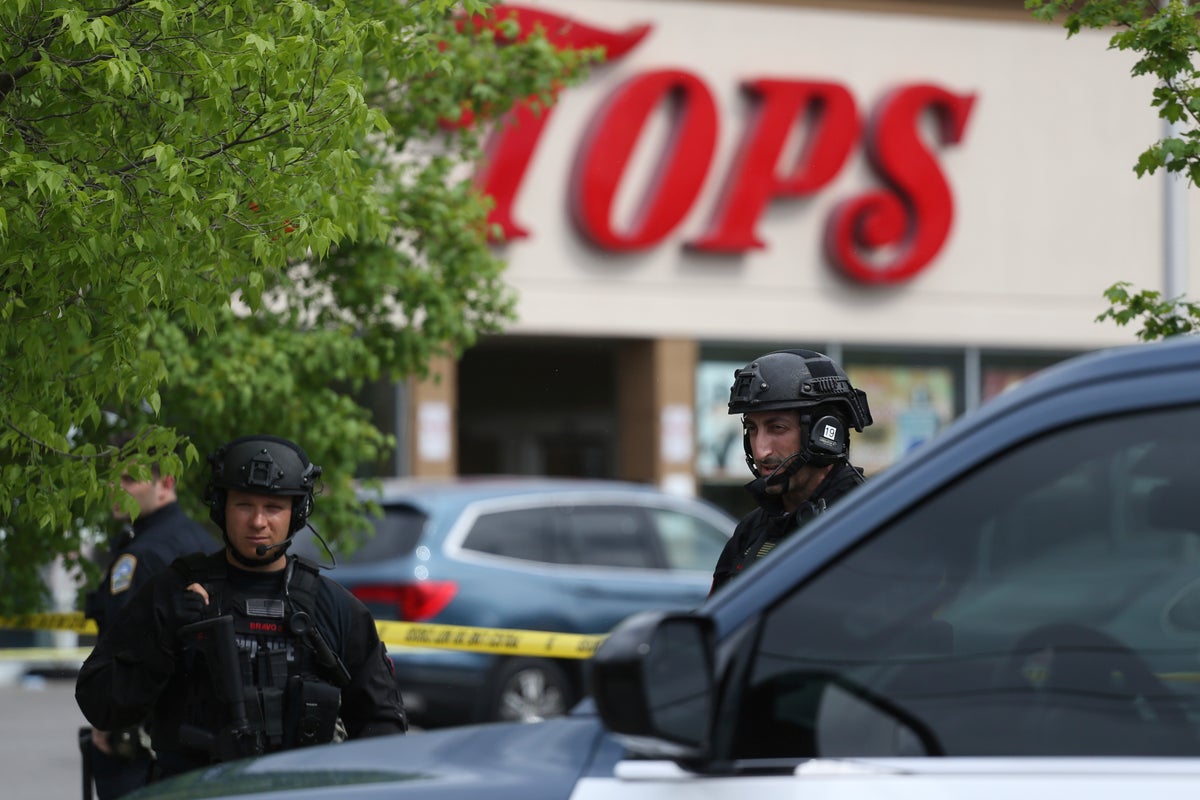 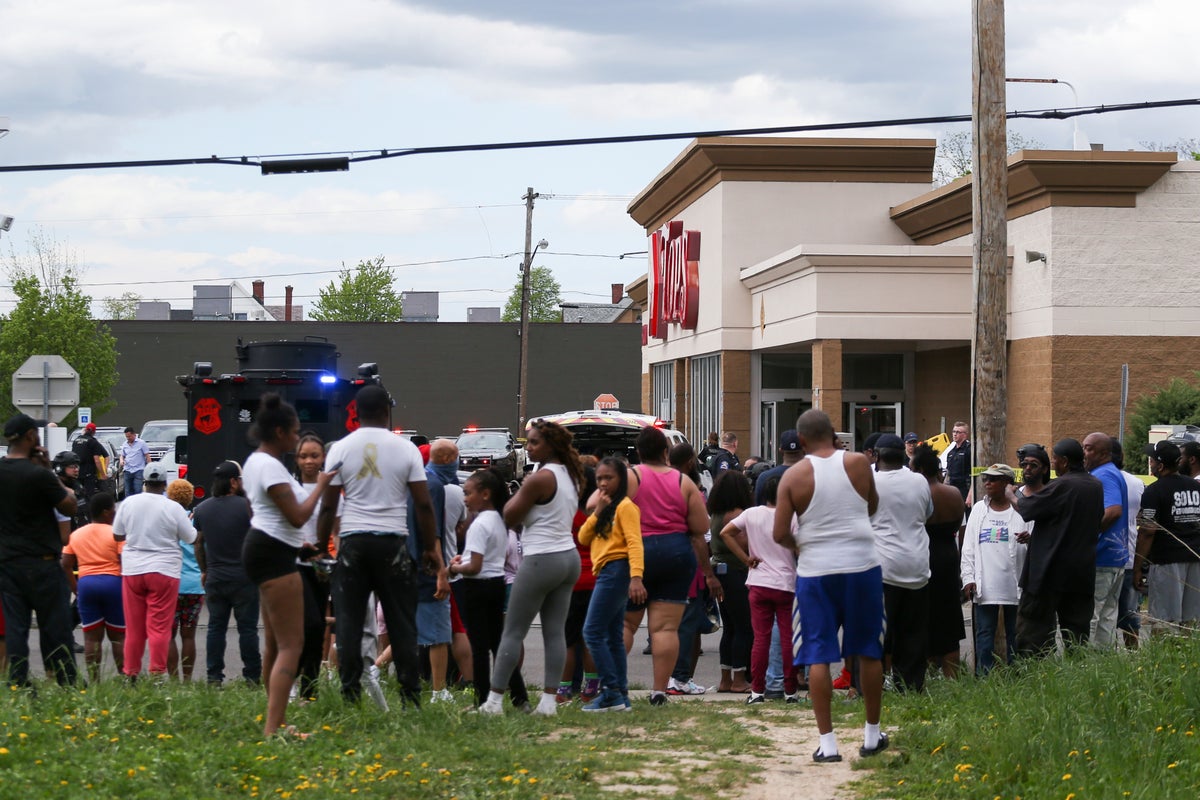 A crowd gathers as police investigate after a shooting at a supermarket on Saturday, May 14, 2022, in Buffalo, N.Y. Multiple people were shot at the Tops Friendly Market. Police have notified the public that the alleged shooter was in custody. (AP Photo/Joshua Bessex)
The Rev. Al Sharpton called on the White House to convene a meeting with Black, Jewish and Asian leaders to demonstrate a federal commitment to combating hate crimes.
More than two hours after the shooting, Erica Pugh-Mathews was waiting outside the store, behind police tape.
“We would like to know the status of my aunt, my mother's sister. She was in there with her fiancé, they separated and went to different aisles," she said. "A bullet barely missed him. He was able to hide in a freezer but he was not able to get to my aunt and does not know where she is. We just would like word either way if she’s OK.”
Related Stories

‘Not a crisis yet’ – Lifeguards, seasonal employees needed as Memorial Day approaches

Tips on keeping your kids safe in the water this summer